Until it died a miserable death in New Orleans, I had been using a secondhand iPhone that I bought from my coworker last fall. I LOVED that phone. The whole cult of Apple thing annoys the shit out of me, but I drank about half a cup of Steve Jobs flavored Kool-Aid once I started using my iPhone.

I tried to get a new iPhone via a swap at the Apple Store, but the phone had been out of warranty for FOUR months. I could have paid $199 to replace it with another 2nd gen phone, but I was really interested in upgrading to a 3g phone. My problem: I wasn't an AT&T customer and I was only six months in on two-year contract with T-Mobile.

I debated buying a 3G for $199, paying the activation, cancelling, and then eating the early termination fee of $250, but there was no way my wife would be OK with me dropping almost $500 for a phone.

Once I made that decision, there was really only one other choice that could get me even close to the capabilities of the iPhone: the G1.

I bought the G1 last week from T-Mobile for $97.97 (a price match with Wal-Mart) by adding a third line to my account for Evan. He's been using a prepaid T-Mobile account for a while and I'm probably averaging close to that in prepaid minutes. We put the phone and data plan ($24.95 per month for 3g Internet & 400 text messages) on my number. I don't have an exact total yet, but my total bill will be around $110 a month for three lines.

All of my comments should be prefaced with this: if you've never had an iPhone, you'll without a doubt, love the G1. If I had started on the G1, I would have never wanted an iPhone.

Although .3 of an inch doesn't sound like much, it seems like a lot when you're looking at the screen, especially when watching videos in landscape mode (which is the ONLY mode you can watch videos in on the iPhone. That said, the G1's display is more than adequate for watching videos, streaming YouTube vids, or general web browsing.

There's a lot of hype surrounding the iPhone's multitouch capability, but it's miraculous qualities are a bunch of marketing crap. Yes, the pinch and stretch feature is useful when surfing the web, but I really don't miss it. Both the default browser in the G1 and Steel (which is a free download from the Android Market) do a great job of easily zooming in and scrolling around pages that are too large to display on one screen. Opera Mini does NOT do well with it. I downloaded, installed, and kicked it to the fucking curb all within 30 minutes.

The sensitivity on the G1 is slightly kludgy. I'm fairly certain it's a software issue, as some apps are better than others in recognizing where you are touching. As Android and it's related apps mature, I think (and hope) that this will improve

The winner on the display is the iPhone by a SMIDGE.

The iPhone user interface is pretty fucking sweet, but after using Android for a week, I think it's much better. 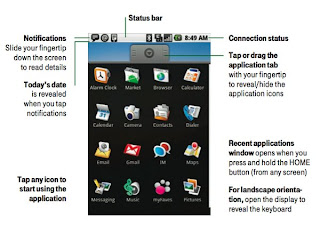 1) You can have apps run in the background. This is awesome for things like Twitter (using Twidroid as the Interface), Facebook (FBook--we'll get to that later), Calendar items, etc. With those items running in the background, you can actually get notifications up in the top toolbar. When an email comes in, I get a "@" symbol, when a new Tweet comes in, I get a little robot, with Facebook, you get the F square icon. You can then touch the top toolbar and drag it down to see the notification and launch the app. I have a Calendar app that puts your upcoming appointments in the dragged down section of the toolbar so that it's always easily available. 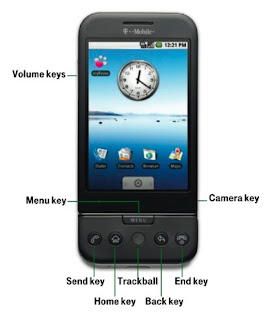 As I stated earlier, the touchscreen is a little flaky, but once you get accustomed to the flakiness (mmm, biscuits) it's easy to get around. There are three desktop views (similar to the ones on the iPhone). You can dock apps on those screens and switch screens with a swipe of your finger. You can also set bookmarks on the desktop (for frequently used sites) and also add folders (I'm assuming for categorizing apps).

In addition, there's a dock at the bottom (the square with a triangle). If you touch that dock, it will open and show you all the apps installed on your phone.

If you want to move something, just press and hold it for a couple of seconds, you'll hear a beep and feel a little buzz (that's what she said) and you can move the icon around (even from the docked folder to a home desktop).

NOW, I really like the trackball. The first day it took a little getting used to. It's awesome for scrolling down webpages (especially Google Reader). There are a ton of non-intuitive things that you can do, so if you buy a G1, hit the web for tips (like clicking the alt key before using it to make it move faster, among others). 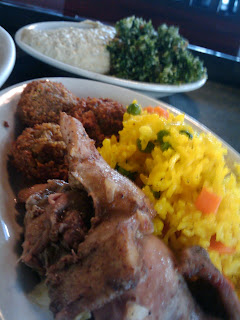 My only hardware bitch is that the camera button is hard to press, even if the keyboard isn't open (why yes, yes this does have REAL keyboard). Thankfully, once the Camera app is launched, you can use the trackball to take a pic. Another issue is that it takes a few seconds to take the pic because the camera (3.2 megapixels) actually has a focus mechanism that is engaged prior to snapping the picture. But, it takes pretty decent looking pics. 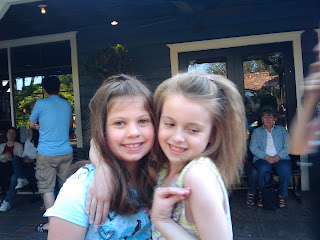 The keyboard is pretty decent too. I have big, fat fingers and haven't had a lot of problems adjusting to typing on the small keys. From my experience playing around with my sister-in-law's Blackberry, the G1's keys are bigger and have a better feel. Compared to the virtual keyboard on the iPhone, the G1 is like heaven. It IS slightly annoying, however, to have to open the keyboard when you're in portrait mode and just want to type in a URL. Steel is cool for that, as it also includes a virtual keyboard for just that occasion. The newest version of the Android OS (aka Cupcake) is supposed to address that and make that available at all times. 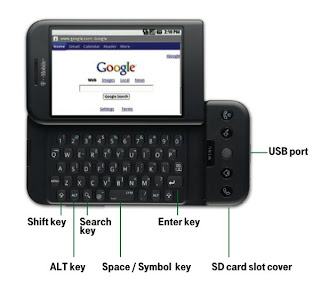 It's pretty much a tie. I really don't notice any difference in the quality of voice calls.

My G1 is faster than the iPhone, but I went from a 2nd gen iPhone (Edge) to a 3g phone. My cubicle-mate has a 3g iPhone and I'll do a side by side test once she gets back in the office to compare speeds.

As fucking annoying and douchey as the iPhone app commercials are, they really do have an app for everything (explosive diarrhea? There's an app for it). Android gets beat the fuck up in a head to head battle. The Android store is still in it's infancy, so I hope that improves as more hardware companies turn to Android for the OS.

Here are the apps that I used constantly and miss: Mint*, Chase Mobile*, Yelp*, Amazon.com*, Zynga Poker, Facebook**.
*Can use a browser based workaround on G1, but it's not as good
**Similar app on G1, but it sucks balls

There are several apps that I didn't have on the iPhone that rock (particularly Barcode Scanner), but overall the Android Market is stinky like feta.

Good lord, if you had told me there was a device even WORSE than the iPhone when it came to battery life, I would have called you a pinche mentirosa. But there is...the battery life on the G1 is a fucking JOKE. The only positive is that you can actually GET to the battery, but I usually have to throw it on a charge around 3pm with modest usage. Sure, you can kill wifi, location awareness, GPS, data syncing, etc, but those are the things that make the phone fucking cool. Thankfully, you can charge via a USB connection, so I just plug it in to my PC at work to give it a refresh in the afternoon. God help you if you are ever on the road and don't have a mobile charger.

Yes, the G1 plays music. Yes, the headphones are proprietary too! Memory is expandable to 16Gb via SDHC cards. It doesn't support Flash either (yet).

Other: Invisible Shield-excellent cover for your screen. Be careful when you apply it!

Overall, I'm really please with the G1. It took a week of using it to really appreciate the things it does better than the iPhone, which offsets the things it still lacks.

The G1 gets a B. If they can fix the battery drain and get some better apps, I'll be a happy end user.

The background app capability is a huge benefit on the G1. Seems like a huge misstep for Apple for not providing this feature on the Iphone.

Very thorough and interesting review, thanks. I don't think I'm in the market for one (since I work from home, I very rarely have a use for my existing cell phone, I sit here with two landlines available) but useful information for possible future use. A couple of weeks ago I was at a zoo in NY with son & daughter-in-law and my grandkids and d-i-l took a picture of us with her iPhone and in seconds had e-mailed it to me and I began to think about how cool it would be to have nice toy like that.

(By the way, nice to have you post an entry. Should we come back to check for your next entry around Labor Day?)

Hey, Fat Man! I miss you! What have you been up to lately...

BTW, I love my iphone so don't try to talk me out of it!

Thank you dearest. Your support is greatly appreciated.
~ FC