So last night was yet another reminder of how big of a stubborn dumbass I am.

It's 8:30pm and Evan comes into the living room with tears of frustration welling in his eyes. He's been working on a make-up quiz for TWO HOURS. And he's still on problem one.

Evan's a pretty sharp kid (he took the SATs last month and scored in the 40th percentile of graduating seniors--what, what) and is in AP math. It's a quiz on similar triangles and all of the background info was covered when he was out of school due to the dreaded pig flu. But, he has a intuitive grasp of things, so his blind flailing into figuring this shit out was pretty much the same as mine. But he got stuck because he didn't know that proportions were the key to figure out the size of the bigger triangle. 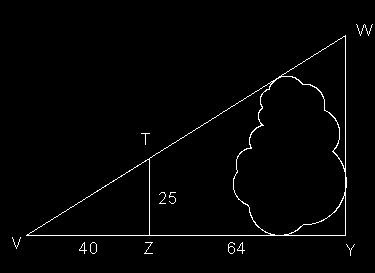 How big is line WY?

WTF? I don't think I EVER had math like this. The most advanced math class I had was high school geometry 20 years ago. Granted, I'm sure I was high the whole time, but I don't remember ever doing this type of shit. But, I do remember the Pythagorean Theorem (one of the few things college era THC & years of alcohol abuse haven't scrubbed from my dying brain, so here's how I attacked the problem.

1) If the two triangles are similar, then if I can figure out the size of the small one, I can back into the big one.

So I start my dumbassery with

OK. If these triangles are similar, than I can use what I have to figure out the rest. If I divide line VZ by the total length VY, that will give me it's proportion to the whole line! (38.4615%). Once I have that, I can divide line segment VT (47.2) by that figure to get the rest of line TW (75.39). Add those together and that's the hypotenuse of triangle VWY. I can THEN do the following: 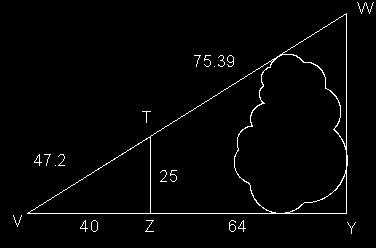 It took 30 minutes to get to that solution. It aggravated the shit out of me because I wasn't feeling good about the process. It was TOO long and involved and the fractional answer was leaving a bad taste in my mouth (TWSS).

Google failed me when searching for hints on how to do this shit last night (but for some reason EVERY link I could find today was perfect), but I epic failed by not remembering that Evan could view his math book online.

I should have figured that there's a much simpler way to do this. There's no way the 7th grade math teacher would have them doing this if it required a calculator (which you'd need to get the square roots).

We move on to problem two, which is the old "You're 5 feet tall and have a 12 foot shadow. The flagpole's shadow is 32 feet tall. How tall is the flagpole" question.

Shit. We should have started there first, because once I googled that and took a look, we hit pay dirt. Pay dirt that takes literally 30 seconds to solve the problem.

Here's how using the first example:

1) Setup a ratio equation using the known numbers
40/104 (the length of VZ [your shadow] over the length of VY [the flagpole shadow]) is equal to 25/x (the length of TZ [your height] over WY [flagpole height]). From there, it's basic cross multiplication to get the answer.

So, if Google fails you and brings you here, that's how you do it. Here are some really good Math sites I found today (when Google decided to allow me the privilege of seeing them) that are even better. I'm sure the folks that wrote them aren't retards like me.


Be happy that I totally fucked that shit up, because it gave me a reason to actually post something to this wasteland of a blog. It's been over TEN fucking years since my first posting in my "online diary" back in the 20th century. My, how time flies. But even though it's 2010, the cars STILL don't. I want my money back, bitch.

Things are going great for me. I still dig my job. I just had my 14th anniversary with Laurie. Evan turns 13 in a couple of months (jesus) and Chloe just turned 9. Still live in the same house. Still drive the same automobile. I went to New Orleans a bajillion times last year. Went to FL for vacation. Went to Vegas in October. Was GOING to go to NY last month, but airfare skyrocketed and I couldn't afford it. I'm still bald and still fat.

Ha...now that we've moved on to me, I've lost interest in writing. How droll.

I'm sure I'll be posting more in the near future, as I'm about to embark on a historic nine trillionth diet at the beginning of February (once I get checked out by my ass loving doctor). It will be EPIC.

What I did was figure the relationship of segment VZ to segment TZ and applied that proportion to segments VY and WY. VZ was 0.625 of TZ. So VY would be 0.625 of WY.

I'm glad you decided to climb back onto the Interweeb thing. Hope you come back again sometime before next Christmas.