Why am I such a technology whore? I fucking LOVE it. Computers, TVs, Blu-ray players, handheld devices, shit with wires, shit with LEDs, 802.11G & N & Wimax & LTE, air cooled with fins, heatsinks cooled with flourescent liquids, liquid crystal displays. If it's got the juice running in it, I WANT IT ALL.

Consequently, I gots lots of bills that are generated as a result of my love of the integrated circuit.
I was reading an article in Gizmodo over the three-day weekend (The Subscription War: You're Bleeding to Death) and was interested in seeing how my stuff stacked up to the "norm" 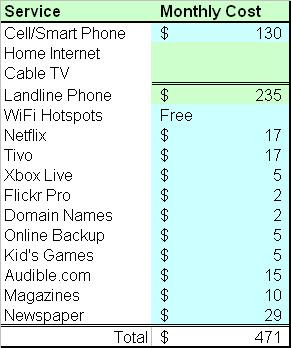 Email ThisBlogThis!Share to TwitterShare to FacebookShare to Pinterest
Labels: Chris is Cool, Nerdgasm

Thanks! You're making me feel frugal.

My Netflix is a couple bucks cheaper because I don't have BluRay. My cell bill was, I think higher when I had five lines on a family plan, but I have finally outlasted a contract without signing up for anything new, so we are bailing out of that plan and in a couple of weeks it will be gone. (My wife has gone to TrakFone, my daughter moved to her boyfriend's plan, my mother-in-law is getting her own plan, my son plans to get his, and then I'm going with TrakFone.) I've got two landlines but one is cheap (part of my cable TV/internet package) and my employer reimburses me for the other one (when I remember to do the damned online paperwork on time).

Is your Web hosting covered under your Internet package? (I'm paying $9.95 a month for that, but I host a bunch of pages for local historic sites, etc. as well as my own journal.)

I swear that the next time the Providence Journal raises its price, we're going to cut back to weekends only.

Have you seen what's available thru Netflix streaming? Piss poor indie weirdo movies featuring Maria Bello naked. Weeds is awesome, but that has been the only treasure.